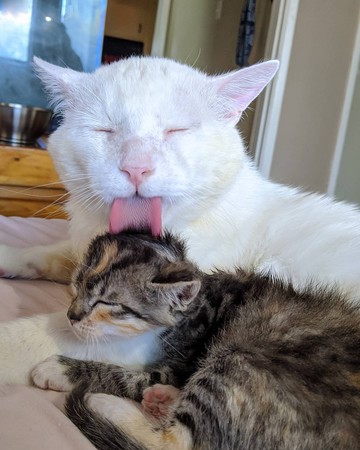 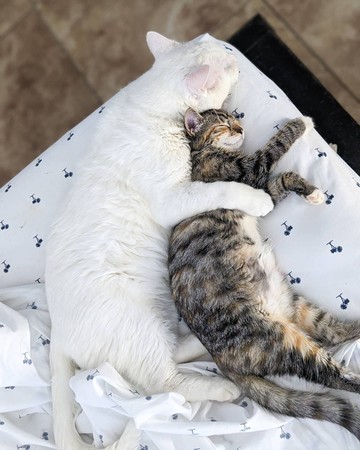 In January we rescued Phoenix. He was covered in mange, FIV+, extremely thin and malnourished, and had dental issues. He was a massive man cat, huge in size, despite his lack of weight from living on the street ... he had been spotted living outside of an apartment building for at least a year as reported by the finder. She had seen him since she moved in but made the decision to get him help after his health started to deteriorate rapidly and she feared he would die. Once we got him home we could tell that he had once had an owner, as he is a senior, and in no way feral. He mostly kept to himself and had a sadness in his eyes even after he started to recover.⠀ ⠀ In April we rescued a litter of 5 sick neonatal kittens. 2 kittens were much worse off than the others and had to be separated from the rest of their litter... of those two kittens one unfortunately passed away, the other started the fight of her life, her name is Ruby. Little Ruby needed round the clock attention and ended up sleeping with us and moving out of the nursery and into our room for round the clock monitoring. She slowly gained strength and weight and was looking for a playmate. ⠀ ⠀ One day she ran out of our room and found Phoenix sleeping in the living room.⠀ Ruby pounced on Phoenix and we were terrified because of his size and attitude that he would harm her. The opposite happened, he grabbed her in his big arms and pulled her into his body and started to bathe her . It was such a special moment and although we were still scared he could get annoyed with her, we let it situation unfold... a love story was born. These two became inseparable. Ruby brought out a side of Phoenix we never knew existed. He started to play and became a kitten all over again. Phoenix provided Ruby with love and sense of security from another feline that she had never received. ⠀ ⠀ They were preadopted together in May and the adopter put off pickup for months and delayed telling her significant other. When it came time to go home it didnt work out and they have now been deprived of the chance to find a forever home ⠀ ⠀ They are now available for adoption. #savinglives #adoptdontshop #kittenrescue #love 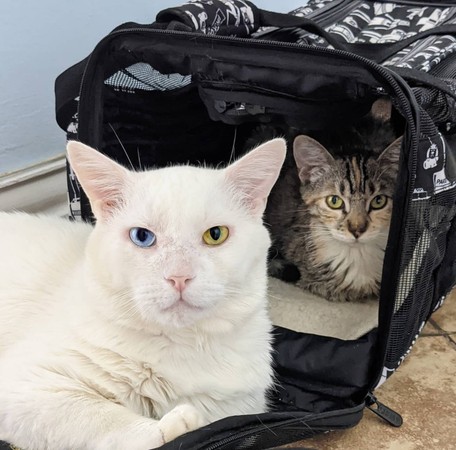